it's not often that I'll stand up and spout about what I think is right and wrong in the realm of childrearing. It's not easy bringing up kids that's a given, different people have different ways of coping with their kids who are all individuals and it's sensible to acknowledge that what works for one child might not work for another.

but i do strongly believe in people teaching their children proper manners and i like to think that I have brought up my kids (well Miss 5, I'm just starting with Poss) to use manners appropriately.

if there is one thing I detest above all things it's kids who speak to adults without the correct level of respect. I do not mind children calling adults by their first name or a name of the adults choosing, different circustances call for the use of different names / titles etc.  Mrs Clutterbug does not sit with me comfortably so Shish is fine, we have some friends who have been introduced to our kids as Aunty or Uncle, others by their first name and teachers are obviously Mr / Mrs / Miss / Ms.

this weekend has brought all my grievances about good manners or lack there of to a head... we had visitors, long time friends who date back to the boys going to primary school together. Their little girl is Miss 5's age, very intelligent (quite possibly gifted) and often very sweet. Her manners? Atrocious! she speaks to adults as though they were her equal. She took to calling Hubby by his nickname (something which her parents call him and have never corrected her from doing) along with answering back and dropping the "please" and "thankyou" from her requests.

I'm not saying she is a bad girl, maybe just undiciplined? Her parents are not as strict as we are (and having said that we are firm with our rules rather than unreasonable and there are consquences when the kids do the wrong thing) and while I know we are not perfect parents I think they could work at setting better boundaries for their daughter.

Now that my Miss 5 has friends over etc, I am more comfortable when I talk to other people's kids and so I found myself more than once this weekend, pulling this little one up on her manners. I couldn't help myself, if she wanted something from me she was going to ask properly. Hubby also told me he said to her (in her mum's earshot) that it was time to start calling him by his first name instead of his nickname... to her credit she did.

I feel a little bad, like this girl might have gone away thinking I was a meany. But I feel like I would be a hypocrite if I disagreed with it so much and yet sat idly by. What do you reckon?
Posted by shishyboo at Sunday, March 28, 2010 2 comments: Links to this post

getting back on track

oooooh er!!!
i didn't intend being away so long but life got busy

we've now experienced the joys of head lice, Miss 5 came home scratching like mad one Friday afternoon and now I am quite adept at the art of nit combing.... not that it's a skill I'll be putting on my resume any time soon.

I've been slowly scratching away at the weeds / unwanted grass in the driveway garden bed, have so far filled 2 garden garbage bags but I've a long way to go.... the weather hasn't been great for spending time in the garden, hot and humid... I only last about half an hour before I'm all headachey.

And the neighbours over the fence appear to be less than impressed (even though it was they who were concerned about the bushes wrecking the fence). A friend who pops by in the morning so our kids can walk to school together told me one morning the woman next door stomped over and stood in our driveway, hands on hips surveying the situation before stomping back home. Other neighbours have asked what happened to the trees but accepted our reasons, these people haven't said a word.

Really there's nothing to get into a huff about as far as I can see but I can feel the vibe so it's weird... you know?

This week, little Poss has been down and out with a gastro bug which she lovingly shared with Hubby and I, we were not too bad thank goodness and it appears to have gone completely now. A bug like that really throws all routine out the window though with all attention focussing on looking after the kids.

But I think we're back on track (though school hols are fast approaching bringing a whole new bag of distractions but lets not get ahead of ourselves )
Hubby starts annual leave this Thursday and I've told him we have to (HAVE TO!!!!) finish painting the dining room by the end of next weekend. We have friends coming in the school holidays and it would be nice to have at least the living areas of the house looking how I want them.

On the clutter maintenance side of things, it's been tricky.... my 'puter desk very easily slides back into chaos and I have discovered after giving my bedroom a general tidy that it makes me feel a lot better when my own personal space looks good. And it's not all my fault.... I have other people here perfectly capable of putting things away properly but who prefer to dump their stuff willy nilly. That will have to change

So many more baby steps to take, won't matter as long as I stay on the path


UPDATE:
Hubby & I are in discussions about getting someone in to clear that garden bed and sort out the retic. Perhaps not the most economical way to deal with the problem but then I never claimed to be aiming at saving buckets of money. We are not the sort to lash out all the time and this in our view would be money well spent....
Posted by shishyboo at Sunday, March 21, 2010 No comments: Links to this post

motivation can come from the most unlikely of places...

on Sunday I had a visitor, our over the fence neighbour... not someone we have an awful lot to do with other than when our driveway bushes are encroaching onto his property

he was quite amiable about it, as was I, I mean we can't exactly shirk our* responsibilities here can we?

he wanted to prune some of the bushes away from the fence and we'd sort out the fence repairs at a later date... and he wanted us to dispose of the prunings since they were ours*

*the fence is actually common property between us and the owner of the other duplex on the block, a fact I've only just found out, so technically we should share any costs... when it comes to the fence repair we might do that

the next day I decided, might be a good time to start my driveway gardening project and as it happened my dear Hubby had promised me a day of helping in the garden as part of his Valentines gift to me (despite his complete disdain for all things gardening)

I had thought it was a reasonably cool day (after our 40 degree heatwave), there was a nice breeze and I got started.... I soon realised we needed a chainsaw and that's a Hubby job

By lunchtime our driveway had gone from this.... 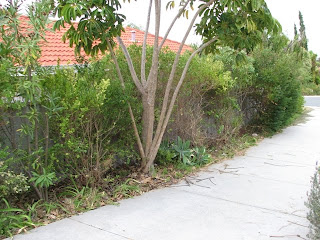 this is actually an old photo from a couple of years ago, I forgot to take a recent Before shot but you get the idea I hope
And when we were finished with it, it looked like this.... 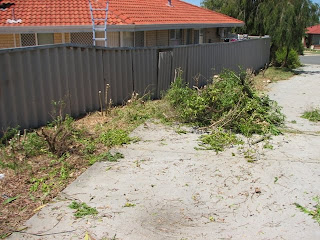 By this time the forecast had been proven horribly wrong and it was turning into a 39 degree day, we were both hot, tired and verging on sunburnt so it was time to stop.
The result is maybe a tad more extreme than I had first envisaged but we really hate these bushes and hate to prune so the intention is to rake out all the crap, get rid of the stumps, then weed mat and pea gravel it and plant smaller plants that are able to survive drought conditions (cos less face it I can't remember the last time it rained here!) and won't grow into a tangled mess and push down the fence.
It probably peeved the neighbour to see us chopping the day after he had pruned, but that's life and if we don't act when the impulse strikes us then it doesn't get done. Also I don't know what the neighbour who shares the common ground with us thinks but she's never done anything to improve the garden so I guess that might speak for itself.
Either way we're doing something about it and when it's done I'm sure everyone will be happy and too bad if they're not hehehe
To Be Continued.....
Posted by shishyboo at Wednesday, March 03, 2010 No comments: Links to this post