well it went super quick that's for sure!

I had a couple of rough patches ( see my grumbly post about parents ) but all in all this month was reasonably good... at least I resolved to push on and do what I wanted and not get bogged down in other peoples baggage.

The highlight of the month was the Good Food and Wine show, Hubby & I went with a few friends and had an awesome time eating and drinking... mainly drinking... we were quite tipsy by the end of the day. We also stayed in a hotel in the city for the night which is a real treat these days.

Hubby took me to a chocolate themed cafe "Koko Black" and we indulged in hot chocolate and what they called a Winter Spoil which was a yummy tasting plate of desserts. Just divine :)

We had thought about going to see the last Harry Potter movie but it was released in school holidays and we both hate going to the movies when the holidays are on so we're just trying to find a spare day that we can go... none have come up so far and I'm starting to think I might have to sneak in a movie day by myself.

Books... I finished Good Omens by Neil Gaiman, I thought it was quite witty but the ending didn't grab me. I've started Passion by Lauren Kate (the third installment of The Fallen Series) and it's great, the story is really coming together.

TV... True Blood Season 4... Eric *sigh*
Camelot... it is good but pales in comparison to Game of Thrones
Weeds Season 6... the story's getting a bit stale I think, I'm losing interest

Films... Red Riding Hood... great idea, great effects etc but didn't quite do it for me :/

Hobbies (Yes I have them! LOL)
Preparations have started for Hubby's birthday party later in the year and we are very keen on themed parties... this one will be a Pirate theme. We intend to deck (no pun intended) out the backyard as a shipwreck / desert island and under the patio will be Davy Jones's Locker / Nightclub / Bar.
We've started building props and I like paper mache as my medium of choice.... my first project in an Octopus 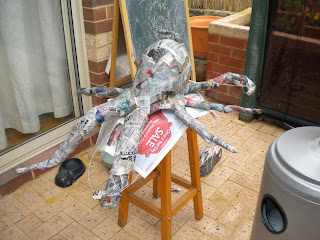 Oh and I've started to write... creatively. It's something I've always wanted to do, always dreamed of doing and yet never really done. I'm my own worst critic... it's a confidence thing (or lack of confidence thing) part of which comes from my upbringing... my Mum's negativity overshadowed any attempt to dream great things for myself and yet my best never seemed to be good enough for her... all very confusing for a kid. Reflecting on it all I've realised that I still don't dream big, for the most part I don't even try, there's always a negative nagging voice in the back of my mind. Sad really. It's time I stopped listening to that voice and start believing I can do stuff... to be continued :)
Posted by shishyboo at Monday, August 01, 2011